Ref:
SIC-103326
The Bayonet continues SIC’s legacy of having the fastest downwind boards in the world. The evolution from the Bullet to a board designed to optimize the performance in flat/calm water
Please select your options 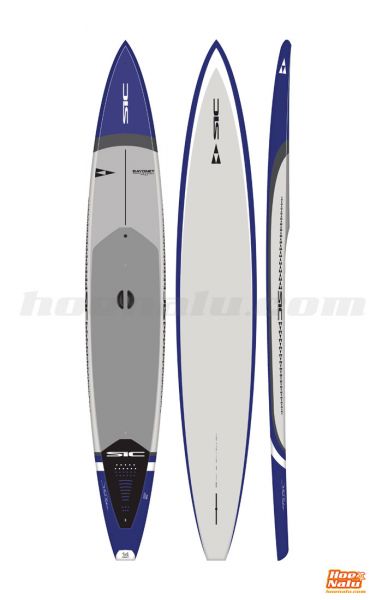 Information
Comments
Information
The Bayonet Series is not a replacement for the Bullet Series; it is an evolution with a focus on taking all that is good in the Bullet and pushing the limits of what is possible in the Bayonet. With the intended paddler being more accomplished and likely a competitive paddler and/or serious touring and fitness paddler. The Bayonet is the answer to the demands of our elite team and focuses on early planing capability and top-end speed.

This board planes early in sub twenty mph winds, and stay on glide longer, edge well in cross chop and has tremendous rail-to-rail steering when on a bump or wave. It does take a bit more agility with the squarer rail shape which promote stability on the narrow widths. It has a bit less under tuck and therefore is not as forgiving as the Bullet. The lower rocker profile means that the board is extremely fast at low speed but does require a bit more agility to maneuver back to the tail when on plane and to mitigate nose poke. The Bayonet 14’ features Super Fly construction (SF), the best technology of the SIC Maui boards.

For 2020 the 14'x26" board is for more accomplished and elite downwind paddlers. This board is often used by serious touring and fitness athletes as well, and it has had a weight loss.

Features of the SIC Bayonet 14' SF:


In the following video you can watch the head master of SIC talking about the Bayonet 2019:


SF - Super Fly Technology
The Super Fly (SF) construction has been a massive leap forward in durability, stiffness and overall performance. With a full PVC wrapped core to give the board tremendous impact resistance with its tip-to-tail / 360-degree rail-to-rail wrap few boards can compare.