Since a few months ago, we can hear everywhere and everybody related to aquatic sports talking about foil. For surfing, kitesurfing, windsurfing and also SUP we can see more people day by day using a foil under the board and flying over the water. If you don't know about foil and what is it, stay tuned and read the following lines where we will introduce you the foil specially for Stand Up Paddle. Maybe you know all that you need to start with the foil, then...
Look the SUP Foil products available.

Trully, foil was created more than a century ago but the last decade has made that the foil becomes a boom, because a lot of kiters, windsurfers and people who go into the water to practice any sport related to glide are using the foil under their boards to experience new sensations and ways of glidding. Stand Up Paddle, as a variety of gliding sport, is involved in this tendency, so we want to introduce you the main keys of this gadget because SUP fans all over the world, mainly US, Australia and Northern Europe, are talking wonders about it.

In this post we will analyze what is foil and how it works. We will also talk about why is it useful for paddle boards and what does it give to us when we ride on it. We will take a look to the foil market for 2018 and what is comming from the best brands like Starboard, Fanatic, Naish or Go Foil, and all that we can see in the horizont for this new modality. Come on!!

Foil is the short name for hydrofoil, a navigation system developed from the hydrodinamic physical laws. It is the result for investigating the movement of solids in the water, and how could improve this movement in that medium. 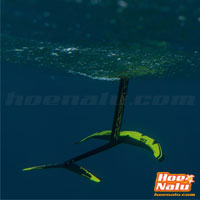 Maybe you could think that the foil is a new creation but it was born in the beginning of the 20th century when the Italian enginner Enrico Forlanini developed the first hydrofoil. Later other scientifist made improves, and they made motor boats who could sail incredibly fast for that age.

Basically, Forlanini and his colleagues were looking to improve the speed of the boat through a less contact surface between the water and the boat, so the friction with the water was least. To reach this goal, they fixed to the boat hull some masts with a perpendicular wing at the end. This system made that the boat emerged from the water achieving a balance point where the forces that push the system combined wih the movement of the boat allowed it for flying on the water faster, like a plane.

So the performance of the foil is based on obtaining a force that elevates the ship hull and conserve it over the water thanks to the wing that is submerged into it, so when the speed is low the system doesn't work, but when speed start to increase, the water pressure under the wing grow, and the one upon the wing dicrease, so the wing goes up and the balance between these two forces makes that the boat remains over the water. It is important to notice that the position of the wing as well as the two forces involved are essential. When the ship is flying the friction between the water and the boat is only generated by the mast of the foil, so it is lower and the speed will be higher than normal.

At the end of the 20th century, Hawaiian watermen were developing tow-in surf systems, that is, how to catch giant waves. To make this, they were propelled by jet skis, which pulled them by a system, similar to water skiing, using surfboards with straps to have more traction.

One day Laird Hamilton, Dave Kalama and friends thought about the idea of catching the big waves of the ocean that don't break but they look great to have long surf sessions. They reviewed all the accessories available through the sailing history, and they decided to try something similar to a foil system fixed to some boards (including a snowboard) to experience how it worked in the sea. The answer was amazing, especially to ride the stronger waves in the middle of the ocean, because the foil system allowed them for increasing the speed of the boards and they could maintain a high speed and still flying over the ocean for a long time.

From this moment, the fever for foiling started and the surf industry began to investigate and develop products that work with the standar surfboards, kiteboards, windsurf boards and of course SUP boards. But all boards don't surf in the same way and they haven't the same features, so each modality needs its own system. ,


Why a specific foil for Stand Up Paddle?

We would like an unique foil for all the sports that we practice, but regrettably the design and shape of the boards is not the same, and the foil system changes for kite, wind or SUP. At the first look you can think that all foils are the same, but if we analyze it on detail, we will see the differences. So it is not the same system for kitesurfing, windsurfing or Stand Up Paddle.

Let's compare the foil for kitesurfing and windsurfing with the one for paddlesurfing, focusing on the three main elements. The Fanatic foil has an additional piece called “wedge” that elevates the rear wing so it is a good resource when you are a beginner and start to use the foil because it improves the control over the board and you can learn to go up with the foil better.

We already have seen that not all foils can be used with all boards. The foil for SUPing is different than the others, so we have focused on the systems that the three big brands of Stand Up Paddle: Starboard, Fanatic y Naish bring.

The Tiki's brand offers the system made by Go Foil. It is one of the first SUP foil, designed by Alex Aguera, who worked and investigated on the develop of a system who works very well with the paddle boards. The Go Foil fins are from Hawaii and, Alex and the people of the brand, still working to offer us better solutions attending to the rider's needs

The Starboard SUP foil stands out for its large front wing, with a lot of volume. The Go Foil generates thanks to its design a lot of support at low speed to help the board rise above the surface of the water and the control is done by smooth movements. The manufacturing technology is carbon worked at high pressure. (6 times the atmospheric pressure), ensuring a wing of the highest quality

The system has an insert that consists in a box that comes with all Starboard SUP Foil boards. Starboard has three board to set the foil fin: Hypernut Foil Board 7’4”x30'', Wide Point Foil Board 8’2”x32” and Freeride Foil Board 10’3”x27''.

Naish, from Malolo to Thrust

The name that we find always in connection with Naish foils is Kai Lenny. The Hawaiian waterman has been the one in charge to develop the Naish system. He tested a lot of models and in a big variety of conditions to get the final product. Naish offered its first foil collection on 2016/17 under the name of Malolo, that was conformed by a board 10’4”x28”.

For 2018 they have taken one more step in the foil with the Thrust, which works with the Hover booards range, that have been made for SUP foiling. The fin fixs to the boards with a plate and four screws. The front wing has a high elevation with an arrowhead to down, who has been designed for an early take off and a high maneuverability when you are on the top. The foil range by Naish consist in: Naish Hover 95 7’0”x27.5'', Hover 120 7’5”x30” and Hover Crossover (opción windsurf).

Naish makes two different sizes of the Thrust: M and L, depending on the rider's weight. The first one is for riders between 55 and 75 kgs, and the L size is for riders from 70 to 95 kgs. The difference between both is the size of the front wing and its surface to guarante the stability of the board for any SUPer. The downturned stabilizer, the rear wing, makes waveriding and turning intuitive and easy. The mast, made in Aircraft Grade Aluminum 6061 with 55 cm of length, can be retrofitted to any style box system. The hardware uses 316 Stainless Steel and the wings are made in fiberglass composite. Whether surfing or downwinding, the Thrust Surf Foil will keep you stoked session after session! 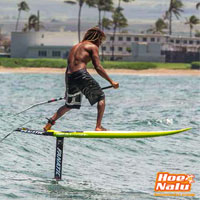 Fanatic has developed the Flow Foil S1 in the hands of Airton Cozzolino, designed especially to achieve an easy to handle foil, so that beginners do not get frustrated at the start. The Fanatic system stands out for its large front wing and its wings with soft depth (anhedral), similar to those of combat aircraft, which help stability and control. Attention in the rear wing are the small elevations that have the ends to improve grip in the turns, and the extra piece called "wedge". that can be mounted optionally, giving higher height of the rear flap so that the first steps with the supfoil are simpler.

Fanatic foil is fixed by a plate with four screws to the board, which must be compatible Stubby LTD Foil Edition, available in size 7'10''x28.5'' and 8'7''x29''. The mast is made in Germany 100%. It's made of high quality aluminum similar to that of F1, the fuselage and the rear wing are made of carbon compound, while the front wing is carbon composite with an admirable lightness and hardness.

As you can see, there are more and more specific products for the practice of SUP foil, and this is an upward trend that the more powerful of the aquatic sports market brands have already joined.

If you also want to rise above the waves, and slide on the water faster than ever, do not hesitate to do it with your SUP foil.

In HoeNalu you can buy any of the products that appear in the post, both foils and paddlesurf boards suitable for use.

Look all the SUP Foil products 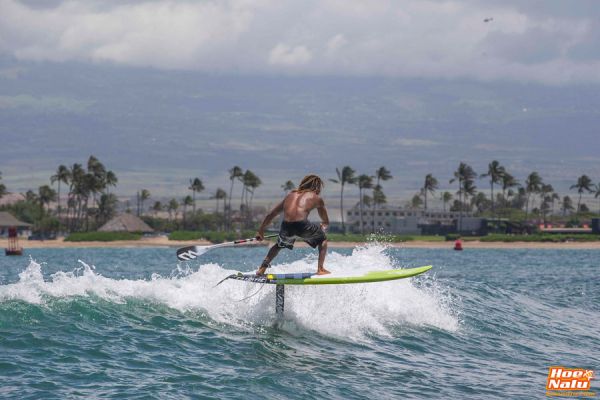