We had the pleasure to meet Dan Gavere, ex-member of Starboard Internatioanl Dream Team, recently appointed as SUP and Windsurf Sales and Event Director for Fanatic USA. He was part of the Starboard team since 2009 and now is part of Fanatic team since 2017.

The whole HoeNalu team would like to thank Dan for his collaboration. we had the pleasure to talk with him during the international meeting set up by Starboard on the Costa Brave in september last year and we thought he was a very friendly and helpful person. A little known detail is that Dan was originally born in Spain, because his father was in the U.S. military and stationed in our country. 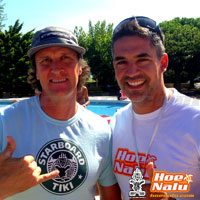 As you know Dan Gavere is an elite athlete which began in water sports from a young age. He is currently dedicated to SUP 100% but occasionally loves to mountain bike and Kite.

Dan is a pioneer in the use of Stand up Paddle boards on whitewater rivers. This year has designed a specific paddleboard for the practice of Whitewater SUP, we are talking about the Starboard Astro Stream. This inflatable paddleboard has succeeded in creating the ultimate weapon to deal with all guarantees to the most demanding whitewater rivers.

Who introduced you to SUP?
JD Davies from Waterwalker/NW Outrigger.com first introduced me to the sport by telling me a bit about it.  I asked how much and went straight to the bank and gave him the money for a board and paddle before I ever even tried it.

What do you prefer? waves, race, whitewater....
I love all aspects of SUP, but if I had to choose one it would be whitewater.  I really enjoy whitewater the best because I love rivers and the environment around them.  Every river trip is an adventure and every rapid is different providing all kinds of challenges and different way to approach them.

Since you collaborate with starboard what is your job in the team?
I am a member of the International Dream Team and have my signature Astro Inflatable board called the Stream.  I also work with the North American Starboard Distributor as the national sales and event manager.  My job is to increase sales and assist our sales team at events through education and face to face consumer relations and demos.

Why did you choose Starboard:
Best product and manufacturing in the business, family run biz with a real feeling of a team.

Can you talk about the Astro Stream?
I wanted a board that would make paddling whitewater easier than anything on the market.  I had a good idea of what the dimensions would be and used the Starboard Astro technology to create a board that is fun to ride and makes paddling through whitewater much easier than a standard sup board.

What do you recommend to somebody who is starting to SUP?
Invest in good equipment!  Take a lesson and buy from a local shop with the best trained staff as possible.  Remember you get what you pay for.

What other sports you practice?
I love mountain biking and have always been an avid fan of riding single track through the mtns.  I also enjoy kiteboarding, riding my dirt bike, snowmobile, and skateboard occasionally but not as much since SUP is my main activity. I even did a bit of yoga as of this year and really enjoy how it makes me feel.

What was your best moment as a SUPer?
I think my best moment as a stand up paddler has been when I get a pat on the back from people who have watched my video and said they learned a lot or in my clinics when I see people improving their paddling skills from me.  Of course I am also very flattered to be known as a pioneer in the realm of whitewater SUP and enjoy the exposure through the magazines and videos that people comment on.

What was the worst moment on an SUP (dangerous situation, accident,etc)?
I have been very fortunate to try some pretty dangerous stuff on the river and not hurt myself!  However last year while in Costa Rica I injured my shoulder while sup surfing and have been working hard for a year to recover without the need for surgery.  I am back to 80% but still have a little ways to go to be 100% again.  Through yoga, stretching, and moderated workouts I am confident I should be 100% again soon.

What SUP taught to you?
Stand Up Paddling has taught me to appreciate all the time I get to spend on the water and participating in an exciting new sport.  I also appreciate everything the people I have met through SUP have taught me from how to paddle better to how to market myself and skills better to simply how to use social networking more effectively.

Where is your favourite spot?
I have been very fortunate to visit so many beautiful places and look forward to seeing a lot more, but by far my most favorite place to Stand Up Paddle is around where I live in the Columbia Gorge/Hood River Oregon.  There are 6 different whitewater sections within 20 miles of my house that are super fun and challenging, as well as, one of the best downwind areas in the world and of course all the flatwater I could ever want on the Columbia River which gets cold in the winter but never freezes or gets much ice.

How is your quiver today?
Astro Stream of Course!  7.10 Airborne in Brushed Carbon, 8.0 Pro In brushed carbon, 14x26 Sprint and an Astro Inflatable 12.6 Race board.  I am also loving my new 2014 Starboard paddles and especially the Foil Carbon High Aspect in size large (90 sq inch).

Why did you pick your quiver?
Well of course my Signature board is at the top of the list. The Airborne because of its new shape and the ability to generate speed in smaller sized surf where I seem to find myself the most anyways. Astro Racer because I can travel with it and its super light and surprisingly fast.

What paddling related accomplishments are you most proud of?
Pioneering of whitewater freestyle kayaking, following my dreams and living them, Pioneering Whitewater SUP and mastering most of the hobbies I get involved in.
I would also like to thank all of my friends and family for supporting my lifestyle and of course companies that have invested in me as an ambassador for their brands…  Starboard, Trident Sports, FCS, Outside Van, Pocket Fuel, Kanahas, Smith Optics, Level Six, Harvest and SUPskins.